Last week, on 19th April, 2016, I was arrested for the possession of LSD as I went to celebrate Bicycle Day, by taking a single tab of LSD on the steps of the Victorian Parliament House, much as I have done on four previous occasions. As always, the intent of the protest is “to achieve regulated access to Transcendent Compounds for spiritual and religious use” and my actions are in protest of the Victorian Government’s continued denial of fundamental Human Rights that are available to Victorians of fairly much every other spiritual and religious belief. 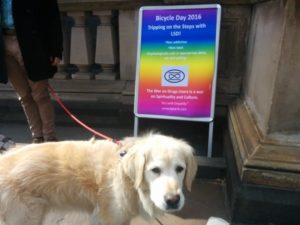 Greg Kasarik’s Golden Retriever, Saasha waits patiently for his return after his arrest for LSD possession. In the background is the sign he bought with him on the day, which is titled, “Tripping on the Steps with LSD”

Now that I have been arrested myself and other members of Community of Infinite Colour (Australia) Incorporated along with other supporters will be using it as an opportunity to put the Victorian Government’s drug policies on trial!

Given our past experiences, none of us expected me to be arrested and initially, there was some fluffing about by the Protective Service Officers, as they seemed unsure as to whether the best course of action. I made it clear that I was cool if they arrested me, but I would rather take my tab, make our protest and enjoy and afternoon of sunshine, chilled music and chatting with people.

This came to an immediate end, once a uniformed Police Sergeant came on the scene and was informed of my intention to take LSD, at which point he made an immediate, unhesitating decision to arrest and my fate, was sealed!

I was in possession of two tabs of LSD. One which I have been carrying around with me for the last several years, so that if the politicians ever got off their arses I could be arrested at any stage.

This was also the tab that I carried into police stations on three separate occasions, in 2013, when I sought to inform the police of what I did and to invite them to arrest me if they so wished.  On each occasion, the police made it clear that they had better things to worry about than someone who is actually admitting to a crime!

Not that anyone can really blame them. LSD is not a nasty drug like alcohol and doesn’t have the same disastrous impacts on emergency service members, as they strive to keep our citizens and communities safe and well.

The second tab of LSD was carried in a book called “Why Good Things Happen to Good People“, by Dr Stephen Post.* More specifically, it was at the beginning of Chapter 6, which discusses “The Way of Courage: Speak Up, Speak Out”.  Hopefully, in deliberately getting arrested, when I could have simply stayed home, I have shown some small degree of courage.

After my arrest, I was taken to the police precinct in Docklands, interviewed, fingerprinted and released on bail, with a court date of 28 September 2016.

All in all, I couldn’t have been more impressed with the courtesy, respect and good humour demonstrated by the police during my time in custody. Although I suspect that they were more than a bit bemused the circumstances of it all and grateful for my own willing participation in their processes.

I should also express thanks to the PSOs, who looked after my wonderful dog, Saasha and my friend Nick Wallis from Enpsychedelia, and a certain gent by the name of Adam, who took her under their care until I could pick her up.

Upon release from court, I was in contact with members of the scientific and Alcohol and Other Drug research community who were happy to let me know that I had their support and that they’d make sure that when I face the supreme court, I have the appropriate expert witnesses on my side.

At the international level, I have been in touch with the founder of one of the world’s leading research organisation and informed that we have his “full support!!” (for clarity, the exclamations are his!!)

As I’ve made clear in a number of previous posts, the scientific consensus regarding Transcendent Compounds, is clear. And getting clearer by the day!

With the scientific research community expressing support, from here, we will be looking at obtaining competent legal advice. Prior to my arrest, I was in contact with a couple of high profile lawyers, but they have expressed concerns as to whether I would be successful in obtaining a referral to the Supreme Court on religious, or spiritual grounds. However, if needs be I will defend myself in court, as the facts of the matter are both straightforward and uncontestable.

We will be using the legal argument that I have developed over the last five years and it is our intention to make full use of the Victorian Charter of Human Rights Act (2006) and its protections of:

“the right to freedom of thought, conscience, religion and belief, including- … the freedom to demonstrate his or her religion or belief in worship, observance, practice and teaching, either individually or as part of a community, in public or in private.”

Personally, I believe that we will have no issues with allaying the concerns of the lawyers. The spiritual and religious use of Transcendent Compounds is an ancient practice that predates the Government’s “War on Drug Users” by thousands of years and will, if we have any say in the matter, still be a crucial aspect of religious practice tens of thousands of years after the small minded, bigoted instigators of this useless, intolerant “war” (and myself for that matter) are all forgotten in the dust of archeology.

During my interview with the police, I specifically requested that the police prosecutor on the day of my appearance at the Melbourne Magistrate’s Court support referring the case to the Victorian Supreme Court, because if I am merely convicted and sentenced on that day, then on the very next day, I (and possibly others) will be back on the steps for a rinse and repeat and will keep it up until such a time as I am able to get to the Victorian Supreme Court and put the Victorian Government’s discriminatory drug policies on trial!

Fact is having being arrested once, its a bit of “been there, done that” and any further arrests will be more of a nuisance than anything.

We will be keeping everyone up to date on developments both here at kasarik.com and through social media and whatever other outlets we can.

However, one exciting bit of news is that in the coming months, the religious not-for-profit, “Community of Infinite Colour (Australia) Incorporated” will be opening its doors to the public in the Melbourne suburb of Bayswater.

While it is our intent to offer the kinds of counselling and pastoral services found in any religious organisation, we’ll also be conducting happiness workshops and helping people to discover their own special niche within the Infiniverse!

As a post-dogmatic religion and based on the “Principles” Community’s role isn’t to tell you what to believe, but rather to help you discover what most makes sense to you and to help you become the most fulfilled, compassionate and joyous person that you can be.

We also don’t take ourselves too seriously, which is why my official title (as spiritual leader) within the group is “Herder of Cats“. Which actually describes what I try to do quite well indeed! 🙂

However, one of our purposes states that we will:

“Promote, foster and facilitate the safe use of Transcendent and Sacred Compounds as individually valid, although not communally necessary, expressions of spiritual practice and Divine connection”.

So, despite the fact that we won’t be distributing Transcendent Compounds on the premises, it probably won’t be terribly long before the whole “psychedelic religion” thing gets picked up by the media and things get interesting once more! 🙂

*NOTE: Not sure if Dr Stephen Post will appreciate the sublimity surrounding his inclusion in the days festivities.

I encourage everyone to buy and read his book, which is all about how being generous is, in and of itself, a huge contributor to the health and wellbeing of generous people.