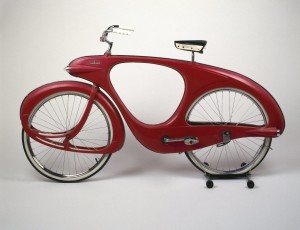 A bicycle on LSD?
Benjamin G. Bowdens Spacelander Bicycle, made in 1946.
(Image courtesy of Brooklyn Museum.)
Bicycle Day is the anniversary of the first deliberate ingestion of LSD, in 1943, by its inventor Albert Hofmann, as he attempted to determine the cause of a strange mind altered state that he had experienced a three days earlier.

It is an amazing story of synchronicity and chance! The discovery of LSD’s psychoactive properties is one of those accidents that reverberate throughout history and forever change our world. Wikipedia has a detailed account of the day’s historic events.

2013 was a particularly exciting Bicycle Day as it marked the 70th anniversary of Hofmann’s wonderful ride and the 70th anniversary of the beginning of the Psychedelic Era. It also was the start of my own personal tradition of publicly taking LSD on the steps of the Victorian Parliament House. Within the context of my own spirituality, I regard the day as one to celebrate new beginnings, and joyful, unexpected surprises.

2014 saw a small crowd in attendance, followed by a celebration in Fitzroy Gardens with some friends, while 2015 was missed due to personal reasons.

This year, we celebrate the 73nd  anniversary of the ride and look forward to the day when our freedoms are respected and LSD is legally available for use by those who wish to do so.

I will be once again tripping on the steps of the Victorian Parliament House, where, sometime after 11 am, I will take a single tab of LSD as I celebrate the Religious and Spiritual freedoms enshrined in Victoria’s Charter of Human Rights and Responsibilities Act (2006).

The lead up to this year’s event has been a bit different, with my twitter account going into overdrive, with (completely ignored) tweets to the Victorian Premier and #springst asking that his Government either arrests me for the possession of LSD (I always have a tab on my person, specifically for this eventuality), or talks to myself and others about how Victorian law can be made compliant with the Government’s Human Rights obligations as required by the Charter.

Assuming that I’m not accidentally arrested by an overeager Protective Service Officer, or member of Victoria Police, I and other attendees will remain around for most of the day (weather permitting).

While I am sure that others will want to celebrate the day by also taking some LSD, I would ask that nobody takes more than they need to get into the spirit of the event. Also for legal reasons, I must insist that nobody else takes LSD publicly, be it on the steps, or elsewhere.

Unlike Hofmann, I won’t be riding my bike home, because none of us want to encourage drug drug driving, or riding!

Of course, if you ask any politician, they will tell you that the Charter does not enshrine these particular rights, but if you ask them why, they will inevitably have to resort to the lies and distortion that have become the unthinking boilerplate of their irrational War on Drug Users.

This sort of mindless political boilerplate doesn’t change the fact that LSD, like all of the other Transcendent Compounds is non-addictive, non-toxic and psychologically safe. The Government simply have no “demonstrably justifiable” reason to claim that the basic religious freedoms available to all other Victorians don’t apply to those who use these substances for religious and spiritual reasons.

Over seven decades of scientific research regarding the safety of Transcendent Compounds (aka hallucinogens, psychedelics and Entheogens), is about as clear cut as can be.

Indeed research over the last few years has only confirmed the safety of LSD, with the very first human trials in 40 years revealing that LSD showing that contrary to the scare lore, LSD can actually reduce anxiety associated with life threatening disease. Researchers Rick Doblin, David Nichols and John Halpern are interviewed about the research here.

Additionally, a study of over 130,000 people has found that the use of LSD, magic mushrooms, or peyote does not increase a person’s risk of developing mental health problems. Indeed, those who have used classical hallucinogens are found to have better mental health outcomes.

Hot off the press! New research using brain imaging techniques has shown us how the brain responds to LSD. While this might be seen as giving more power to a reductionist view of the experience, the Transcendent power inherent in the use of these substances is both undeniable and incredibly valuable to those of us who have had the courage ignore the stigma and bigotry and use them to explore our own consciousness.

There is only so much that one person can do in a fight against a system that is determined to ignore reason, evidence and basic human rights. I encourage everybody to get involved and invite everybody to come along for an enjoyable day of drug law reform activism.

But wait! There’s more! The day after Bicycle Day is the worldwide 420 rally, with the Victorian event to be held in Melbourne’s Flagstaff Gardens and others planned for around the country.

There are all sorts of really exciting developments on track for the next year, including the massive launch of Students for Sensible Drug Policy and participation in the upcoming federal election from Greg Chipp and the Australian Drug Law Reform Party. I fully expect the next 12 months to be just as full of exciting developments and hope to be able to contribute to the realisation of freedom for us all.

As always, the best place to keep up to date with developments, is with Nick Wallis and his wonderful Enpsychedelia Radio show, which can be heard each Sunday at 2pm on 3CR, or found on Facebook.

For additional information, check out these other pages: