The Symbol of Life is a mystical symbol, which represents what can be regarded as the four fundamental attributes of existence, Sentience, Meaning, Purpose and Wisdom. 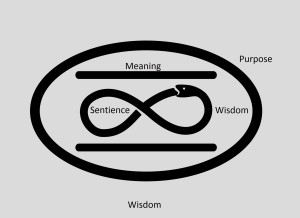 The Symbol of Life emerged (was revealed to me?) during three separate mystical trances over the course of about 18 months, in which I visualised each element sequentially.

Interestingly, enough, the representation of “Wisdom” didn’t emerge from a trance state, but instead its realisation occurred during my meditation of the Symbol itself. This is important, because it is only through contemplation of our experience and through continually questioning our own assumptions, beliefs and creations that we can ever achieve anything remotely resembling Wisdom.

While the symbol itself is finite and quite simple, it is of Infinite reference and symbolically fractal, in that it applies to every scale of consciousness, ranging from the barely existent, through to that which we would regard to be practically infinite and Divine.

Irrespective of the size of the symbol, there is always a finite space within the ellipse that represents purpose, yet there will always exist an infinite space in which Sentience can expand.It is only through the expansion of our finite awareness and understanding that we achieve Wisdom.

It is important to understand that Absolute Wisdom lies forever outside the grasp of any Sentience: Even for the Eternal Being, there is always potential to achieve infinitely more growth, understanding and Wisdom.

There is much meaning contained in the Symbol of Life and my thoughts here are certainly not the last word.

Sentience is represented by a snake giving birth to itself, in the form of an Ouroboros, in the shape of the Infinity Symbol.

While the ouroboros has an ancient pedigree, and has traditionally been in the form of a circle, it has also increasingly appeared as an infinity symbol. Until my vision, I didn’t have any particular conscious awareness of the symbol, although I’d certainly have encountered it prior.

Sentience, represents life continually giving birth to itself and forcing itself into existence. Failure to do so results in stagnation and death. Life can never know from where it has emerged, or how this has occurred.

In this context Sentience can also be regarded as a placeholder for existence itself and the Eternally unsolvable conundrum of “Why Something Instead of Nothing?”

Parallel bars represent the forces against which life must struggle to overcome. They continually press against Sentience, threatening its existence and represent the challenges and difficulties from which we derive significance and value.

Should one cease to struggle against these obstacles, stagnation and contraction are the inevitable result, as one is slowly forced into spiritual retreat and a loss of meaning. Once one resumes struggling against these forces, so too does one regain meaning in their lives and resume their spiritual expansion.

Meaning within the context of the Symbol of Life does not entail violent conflict. Indeed, the most worthy struggles are those that are undertaken with the view to avoiding violent conflict and such conflict is often a sign of spiritual immaturity and absence of Wisdom.

Many of the struggles that we face are inherent in the very structure and story of our lives. For example, the ultimate fact of all of our existences is that death awaits all of us eventually. How we deal with and manage ideas about our own deaths as well as those of our loved ones is often a significant determinant of meaning in our lives.

Challenge also needs to be appropriate for our level of personal and spiritual growth. Too great a challenge and many will balk at the difficulty, but not enough and there is no challenge.  In either situation finding Meaning can be difficult.

Ironically, the absence of challenges in our lives doesn’t mean that Sentience can expand unhindered into Wisdom. If challenge isn’t presence, stagnation will also occur, because there is nothing to  motivate and drive Sentience into greater achievement and learning.

For example, imagine playing a game of chess against an average six year old, compared to playing against a Grand Master. For most people, a game against a three year old, would present no challenge and be meaningless within the context of the game itself (as opposed to one’s relationship with the child). Similarly, playing against a Grand Master would be equally without meaning for the average person as the challenge would be far too difficult.

The oval represents sentience expanding into the unknown. What is contained within the oval is known, but irrespective of how much is known, there is always an Infinite yet to be explored.

Many spiritually insecure people argue that there is one path for all, be it “Enlightenment”, or being “saved by Jesus”, or whatever. The Symbol of Life illustrates otherwise. Just as one can move from the centre of the ellipse in any direction, so to can one fine purpose in any one of an infinite number of different kinds of life.

Ultimate Purpose can only be determined by the individual connecting with their Ultimate Self (and as indicated by the Symbol of Life, this Ultimate Self isn’t stagnant and unchanging, but exists in a perpetually evolving, dynamic of progression .

Once this recognition has been achieved, one’s Purpose will become integral to the person and while a new raft of obstacles will emerge to provide meaning, acting in accordance with one’s purpose will become the path of least resistance.

Purpose is not to be confused with “Destiny”. In an Infiniverse in which every logically and mathematically possible outcome exists, there is simply no one best, or ultimate path for any particular sentience to take.

For example, when I was young, I was an outstanding singer, having appeared on TV and performed in several professional operas by the time my voice broke. I loved singing, so pursuing a career as a professional singer is a path that has undoubtedly kept alternate versions of “me” entertained for many lifetimes. The same could be said of my time spent as a soldier, or counsellor.

Today, I choose to be on the path of the mystic, but who knows how this path will change and evolve over whatever years, or days I happen to have left.

The area both outside and inside the oval represents the Infinite into which Sentience expands and the potential inherent within the Divine. Wisdom and understanding is to be gained by learning and experience of the new, and true wisdom requires experience and understanding of all aspects of existence.

It is important to realise that within the context of any spiritual journey, whether Infinite, or just over the course of a lifetime, much of this new Wisdom will directly contradict that previously accepted.

If one imagines the Symbol of Life as being an onion with an infinite number of rings, one can imagine the spiritual journey as being a process of peeling layers off the onion from the inside. Each layer that is removed expands the empty interior of the onion, increasing our Wisdom.

But eventually, we will encounter a “joke layer”, which when removed off proves that everything that we previously thought to be true was in fact substantially incorrect. For example, we might discover that instead of being inside an onion, we were in fact inside a set of Russian Dolls.

To close one’s mind to continued learning (such as through the acceptance of  Dogmas), is to effectively put a brake on one’s ability to gain new Wisdom.

In using the word “Dogma”, I am not using it only in its strictest sense of “a principle or set of principles laid down by an authority as incontrovertibly true”, but also in respect to any belief, or idea that is held to be fundamentally correct, or beyond challenge.

The point is that as soon as you think you have the answers, you’ll stop looking for new explanations. Despite all the lessons that life might throw your way, you’ll cease to learn, cease to grow and start to stagnate.

The American businessman Ray Kroc, summed this up well, saying: “When you’re green, you’re growing. When you’re ripe, you rot.” 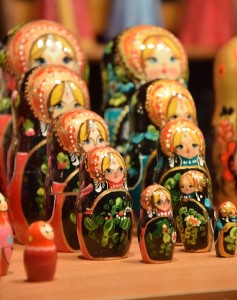 The Joke Layer: The onion becomes a Russian doll.
(Image Courtesy of Wikipedia).

One thought on “The Symbol of Life”