I think that it is appropriate that we keep things in perspective when it comes to thinking about the November attacks in Paris.

Yes, they are horrible and a real tragedy, both for France and for those involved, but despite their best efforts, the attackers managed a death toll that equals about two weeks of fatalities on France’s roads. 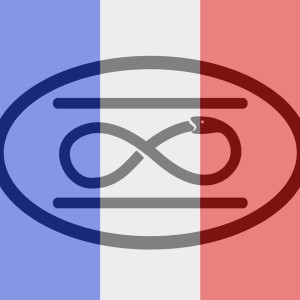 Symbol of Life with French Flag Overlay Courtesy of Facebook.

3250 people died on France’s roads in 2013, but nobody batted an eyelid. A curfew wasn’t imposed, French people weren’t advised to remain indoors (or stop driving cars), and the country’s borders weren’t closed.

The difference of course, is that we have evolved to seek out meaningful, yet unfamiliar cues, perhaps because these are likely to be augurs of change and disruption. When we see something like the French attacks, we are drawn to them, like moths to a flame and if we aren’t careful, we risk getting burnt.

But there is more to it than that. As of today, there have been a reported 129 deaths (although this will surely rise, as some of those who survived succumb to their injuries), but a little over a month ago, 99 people died in the Ankara bombings in Turkey. I doubt many people in the West, even noticed. Similarly, on August 14, 2013, the Egyptian security forces massacred at least 817 (and likely more than 1,000) protesters in Rabaa Square.

These victims didn’t warrant a Facebook filter and their deaths seemed to be regarded by Westerners as “business as usual”, rather than tragedies for those countries.

Our responses to these attacks say something significant about ourselves and the comparative value that we place on the lives of people from a Christian, European country, compared to those who are “over there” and separated from us by culture, history and religion.

Perhaps one could say, “out of mind, out of sight”.

Irrespective of this, by giving ourselves over to histrionics and fear, we are allowing 8 or so Parisian terrorists to achieve exactly what they wanted: To instill fear and to force us into rash and self-destructive behaviours, such as the knee jerk rush to drop yet more bombs on the Middle East, despite the fact that yet more death will most likely only feed the narrative that sustains the toxic ideology behind these attacks.

Rather, we should recognise that while ISIS has claimed responsibility for this attack, the attackers (with the probable exception of one who was found with a forged Syrian passport) they appear to be French (or perhaps Belgian) nationals and as such are perhaps more indicative of French policy towards its Muslim minority, rather than any threat posed by ISIS to the West.

While 10% of French people are Muslim, French policy towards its Muslim population has been less than stellar, with many living in virtual slums, known as banlieues, where they are marginalised and face significant barriers to both education and employment. Despite its famous revolution of 1789, France is still run by an entrenched elite, with graduates from its Grandes écoles (Grand Schools), finding an easy path to the heights of political and civil service. Needless to say, the children of blue-collar workers, or minorities are very poorly represented within these schools.

Of course, I don’t say this to provide some sort of excuse for the terrorists. What they did was abhorrent and repulsive and if there is any justice in the Infiniverse, they will answer for their actions. But if we are ever going to be able to succeed in ending these sort of attacks, we need to understand the context in which they arise, lest, in our ignorance, we become their enablers.

To conflate these terrorists with Muslims as a whole, or Syrian refugees specifically (as has been done in the US presidential campaign, where Republican candidates have been quick to call for the complete exclusion of Syrian refugees from the US), is to create yet another divide between “Us” and “Them” that will only perpetuate everyone’s misery.

Indeed, Muslims are just as horrified by these attacks as anyone else. Waleed Aly, an Australian Muslim academic and media presenter, put it extraordinarily well when in a segment on The Project, when he said:

“We are all feeling a million raging emotions right now. I am angry at these terrorists. I am sickened by the violence and I am crushed for the families that have been left behind, but, you know what, I will not be manipulated.

“We all need to come together. I know how that sounds. I know it is a cliche, but it is also true because it is exactly what ISIL doesn’t want.”

Certainly, there are problems within modern Islam, just as there have historically been problems within all religions. But this does not mean that there is a problem within every Muslim.

So, rather than focusing on “Islam”, “Christianity”, “Buddhism”, “Atheism”, or whatever, I would suggest that instead, we focus on the choice between “Light” and “Dark”.

Light represents the forces of creation, growth, love, compassion, hope, optimism, honesty and forgiveness (among others). Darkness represents death, greed, selfishness, power, lies, destruction and the very negation of existence (among others).

One is Life affirming, the other is Life denying and although they exist in opposition, their relationship to each other and ourselves is far more complex than it might initially appear and these terms are not necessarily synonymous with “good” and “evil”.

Once we start to think in this way and assuming that we are not entirely blinkered, we can see that both Light and Dark exist not only within every society, but within every person. Once we understand this, we can more easily recognise that each of us have a choice, but that our choice isn’t about what we believe, but about whether we choose the path of Light, the path of Darkness, or decide to fluff about in the middle.

Most of us (including those terrorists) mindlessly believe that we have chosen the path of Light, but such a commitment requires that we be perfectly honest with ourselves about our own failures and the Darkness within. Failure to engage honestly with our own weakness, temptation and failure will lead us into Darkness because dishonesty and lies are by definition, the negation of truth.

Honesty also requires that we admit that while we may have chosen the path of Light, none on this planet (without exception!) are, or ever have been, worthy of claiming to be Beings, or Avatars of Light. Whether we talk about, Jesus, Buddha, Mohammed, all the prophets, saints, or ourselves, we are all flawed and in committing to a path, we are merely starting on our journey, not arriving at our destination. Thinking otherwise is hubris.

Having made a commitment to Light, we are now in a position to reach out to others who have chosen our path, rather than blindly including, or excluding people simply because of what they profess to believe. Similarly, by committing ourselves to a path of Light, we can understand that what we happen to believe about the nature of the Divine is less important than how we chose to act and behave towards others.

Frankly, beliefs are only important to the extent that they drive behaviour. It matters little if one believes in a god, gods, or no god. What’s important is how we act towards others and whether we leave a trail of healing, or disaster in our wake. Do we build, or do we destroy? Do we forgive, or do we hold onto every grievance? Do we give generously, or do we take selfishly? Do we make war, or do we make peace?

By focusing on a paradigm of Light and Darkness (notice I say “Light and Darkness”, not “Light vs Darkness” – for reasons I will tackle in a later blog post) we can circumvent the silliness of painting particular groups (who are inevitably outsiders) as being somehow inherently “evil”, while others (ie. US!) are necessarily “good”. Instead of mindless stereotypes we can acknowledge that just because others are different from us, or don’t share our values, it does not therefore follow that they are bad.

In doing so, we can open our hearts and minds to the truth that while we are all different in many ways, we share a common humanity. It is this sense of shared humanity that will allow us to reach out to others and embrace them with their differences, so that we may survive and prosper in a world in which we are sorely tempted to cleave to our own and turn our faces away from the suffering of those outside our tribe, while arrogantly ignoring the festering Darkness within.