The Paradox of Disbelief: Belief without disbelief is mindless superstition. 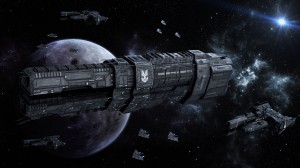 Not all science fiction is so easy to spot…
Once again, when seeking to understand the “Truth” and the world around us, we are faced with a seeming paradox, namely that “Belief without disbelief is merely uninformed superstition”.

At first glance, such a statement appears to be little more than meaningless play on words. Surely belief is a binary concept. One
either has it, or one does not. If a person believes, it follows that they can’t disbelieve, and similarly if a person disbelieves it is difficult to see how they can also believe.
Thankfully, the wording of the paradox is perhaps indicative of its real meaning and import. In saying, “belief without disbelief”, we are effectively saying that in order to fully and correctly hold a particular belief, we need to be in possession of all of the relevant information related to that belief. A significant amount of that information will relate directly to the reasons why other people do not hold a particular belief, so in order to truly claim a particular belief, we need to educate ourselves about the reasons why we should not hold that particular belief.

If we don’t understand the reasons why we shouldn’t hold onto a particular belief, how can we know that there isn’t some information out there that might change our position regarding such a belief? If we don’t challenge our beliefs by finding reasons to disbelieve, how is our belief any different from the most primitive, ill informed and irrational superstition?
The answer is, of course that it is not: Willful ignorance is no way to ascertain truth.

This philosophy is one that has been categorically rejected by nearly all faiths throughout history. Religion has most often been a tool of social and cultural control, with dissenting positions forcefully repudiated and punished, often in the most barbaric way. With few exceptions, all traditions, be they ancient, or modern have condemned the very questioning of the basis of belief in their dogmas. The Roman Catholic church is particularly famous for having its Inquisition and list of proscribed books. Islam has, since early in its history, imposed the death penalty on those who would renounce its “wisdom”.
Even in modern times, hostility to the very idea of questioning one’s beliefs is at the core of many religious movements and is arguably one of the primary indicators that a particular religion is a “cult” (in the modern pejorative, rather than ancient historical meaning of the word). Jehovah’s Witnesses full of their own Righteousness will cut all ties with anyone who they regard as an “Appostate”. Many modern American’s wouldn’t dream of voting for an atheist as President and many have enormous difficulties in voting for a person who isn’t fully “Christian” in their eyes.
In early 2012, a “Reverend” Dennis Terry summed up much of the problem, when he made the following declaration from his pulpit:

Nobody should be surprised that this sort of bigotry and hate should exist in a country of more than 300 million people, but what was surprising was that the service in question was attended by none other than Rick Santorum, who at that time happened to be one of the two main contenders to be the Republican nominee for President of the most powerful country in the world.
This worthy certainly didn’t contradict the good “Reverend’s” stance, which is perhaps unsurprising, given his own explicit attacks on regarding university education on the basis that:

“The indoctrination that is going on at the university level is a harm to our country…62 percent of kids who go into college with a faith commitment leave without it”.

Of course, this “indoctrination” that he fumes at is nothing more than the simple process of encouraging people to question their beliefs and assumptions and the result of first time exposure to ideas that contradict those with which they were raised. It is ironic that so many advocates of the rugged independence and individuality of the American spirit will reject that very same individuality as “indoctrination”, or alien when it produces results that don’t mirror their own views.
In reality, many of these children don’t “leave without faith”. Rather they become exposed to questions for which there are no real answers and many will return to the faith of their parents in the years to come.

But it isn’t simply the theists who are at fault in this. Similarly opposed to the questioning of basic beliefs are those who would best be described as “fundamental atheists”, who’s crusade is often described as nothing short of the elimination of religious belief in all its forms. Their certitude regarding something that they can never know for certain (ie the non-existence of god”) is just as misguided and incoherent as that of those they would seek to oppose.