The Principle of Life: Life is about the Journey. There can be no destination. 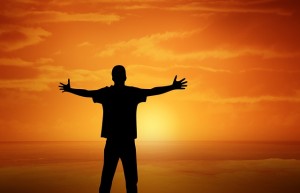 Note: When writing this section, I got a bit carried away with the philosophy of things – sometimes there are simply too many ideas competing with each other inside my head.  So the discussion has quite a bit of crossover with the Omniscience Principle and doesn’t really reflect the original intent of the Principle of Life, which is more about enjoying a meaningful life and not worrying so much about issues of death and dying. I’ll rewrite it to reflect this when I get time. But, on with the show….

The majority of people live their lives as if they are going to die, all the while hoping that they are Infinite. A meaningful life gets it the other way around.

So, while it can not be regarded as a certainty, it is highly likely that as soon as something exists, everything must exist. In other words, we live in an Infiniverse in which all mathematically and logically possible things do in fact exist, irrespective of how silly, or fantastical they might seem to our normal consciousnesses. Within this framework, if an eternal being is logically and mathematically possible to exist, it will exist.

Looking within our own planet it seems that life expands to fill the void in which it finds itself, forever adapting, growing and experiencing. While we only know of life on our planet, the universe is littered with organic molecules and quite likely littered with life as well. Within the context of the Infiniverse, if an Infinite being is possible, then it will exist.

If an infinite being exists its very existence will equal dominate that of all other beings if only within the framework of its own universe. If it exists, the possibility of you not being that being is approximately one over infinity.

What that being does is arguably up for discussion, but the odds of you being an Eternal being and only in the first 100 years of that Eternity are the same as you not being the eternal being. This tells us that what we see around us and call “life”, is actually the main game. It is a key to our existence as an Eternal being.

Why? Because as an Infinite, Eternal Being you face the same Existential crisis that all beings face. The questions of meaning, purpose and destiny.

We live these lives because our eternal self craves experience and meaning. It incarnates itself in bodies that will eventually age and die, thereby providing limitless opportunities for gaining understanding, knowledge and experience. These lives are difficult, because difficult is interesting and challenging. An eternal, infinite being has no need of toys, technology or other distractions that lie outside of the self. If It wanted to, It could happily spend its Eternity in the mindless pleasure of an infinite orgasm. Instead, it craves challenge, engagement and meaning and this is to be found in the universe as we find it.

Our lives are integral, on a range of levels. Not only are our unique existences a source of an infinite number of engaging experiences and stories, but the situation that we find ourselves in as a race and as a planet full of sentient beings creates a challenge fit for an Eternal being. Ultimately, what greater goal could an Infinite being have, than to bring peace and harmony to a universe such as ours?

There is not one single outcome for this universe, but rather an infinite number and you will explore all of them, living all of the lives of all sentient beings. Some of these stories will end in tragedy, others will end in sublime, ecstatic joy. And it isn’t just this universe, but that of all possible universes, although there is nothing that says that any particular Infinite being must explore them all. Just as there are an infinite set of numbers between zero and one, so too is there an infinite set of numbers above zero and another below. Ultimately, which you choose to explore will be up to you, but as an infinite being, spending 100 years of life in pain and hardship is but a fleeting pain, akin to ripping off a band aid, so at the very least, one can certainly expect to live the lives that one sees around you.

Indeed, your life isn’t really complete until you’ve lived it through the lives of everyone with whom you’ve ever come into contact with, or impacted upon.

Now, it may of course be the case that I am wrong and that all that exists is what we see around us and that there is in fact no Infiniverse, but I’m an insufferable optimist and my beliefs accord with my temperament.

To the extent that such a being can exist (see the Divine Principle), god is the ultimate sentience of existence. But even god is limited by the fact that He is a part of existence rather than it being a part of him. In many ways, “God” is the unattainable end product of existence, not the beginning point.ate the highs. Unfortunately, while this is a question of Psychology, it is unanswerable, as it relates not to our psychology, but that of the Divine Mind.