The first Disciple is always the first Heretic. 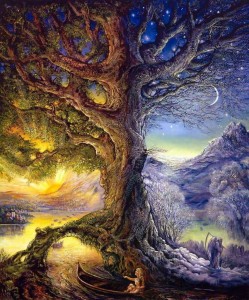 Ever noticed that people never seem to be able to agree on anything? That nobody sees the world exactly as you do? Its bad enough when people disagree about which is the best TV, car or holiday destination, but as soon as spirituality enters the picture it can get downright messy.
Two people will almost never be able agree on all aspects of a particular spiritual path. Even within organised religions, with well established dogmas, practices and books that are believed to have been divinely inspired, one still finds that there is an almost continual
reinterpretation and disagreement of the various elements of belief.
This occurs whether the people concerned are priests, theologians, or the faithful laity. For some reason it seems that people are incapable of accepting everything that they are supposed to believe and engage in a continual process of adapting what they are told, in order to make it more acceptable to their own senses.

Indeed, this can happen, even when it is god himself who is supposedly attempting to communicate his message directly to his handpicked disciples. For example, within the Christian Tradition, Jesus famously rebukes his own followers for failing to understand his message (Luke 9:44-56). Even after events of Pentecost, where the Holy Spirit was supposed to have filled the disciples, opening their eyes to the fullness of Jesus’ message, the apostle Paul documents ongoing disputes in the nascent religious community as they argue over issues such as circumcision and dietary laws and divide into different factions.

These ongoing divisions are a feature of the historical religious landscape with literally tens of thousands of different denominations existing just within the few major religions, which dominate our world today.

If not even God can explain his message directly to people then what hope is there for anyone else when it comes to figuring out what is going on? The answer, of course is “none”. Given the Uncertainty Principle, this should come as a surprise to nobody. In a very real sense, the answers aren’t out there and this needs to be accepted as an inherent part of the search for meaning, rather than some people arrogantly pretending that they have the answers and that somehow their ideas about the Divine Mind are better than yours.

In addition to the Uncertainty Principle, the very nature of the phenomena which we are exploring is itself a major barrier to  communicating any “truth” in any meaningful way.

But our language cannot communicate things that lie outside of our normal experience and our brains are not well equipped to understand the Infinite. For this reason, the word most often used to describe the feeling of connection with the Divine Mind is “ineffable”.

When a mystic talks about “love”, they are often attempting to describe something altogether different than the concept that the word normally entails. In a similar vein, when they use words such as happiness, or joy, these relate to experiences which have no real earthly parallel, and as such listeners with no shared experience are unable to fully understand the message being communicated.

As if this weren’t complex enough, there are a range of experiences that simply cannot be expressed in any meaningful sense. For example, I often experience the Infinite opening up within my own mind during a mystical experience. What this feels like is impossible to communicate with any meaning, but it occurs and is perceived by me as a powerful evidence of the nature of the Divine Mind.

Even the lessons and understandings that people partake of during a spiritual experience are impossible to describe, or adequately explain. Often these might take the form of a Eureka Moment: an instantaneous understanding about some aspect of the universe, or one’s spiritual journey. In these cases, immense truths are revealed within an incredibly vivid and powerful flash that can only be understood by the normal mind through an ongoing process of interrogation and questioning that can take a person months, year, or decades to unravel.

Part of the reason for this need to unravel and interpret the mystical realm, is that often the visions, or impressions that one gets during such an experience are highly complex, pregnant with subtleties and perhaps even apparently blatant self contradictions.

And if it weren’t already hard enough, a single mystic, who has experienced more than one experience of communion with the Divine Mind will often discover that the different experiences don’t all fit together like a neat jigsaw puzzle and that any attempt to hammer them into a single coherent framework risks destroying the integrity of the journey.

But having had access to the mystical realm does not mean that I will automatically understand the nature of another mystic’s visions, revelations, or experience. There is no way of ever knowing if my experience of the Infinite is the same as another person’s. In fact, there are excellent reasons for supposing that my experience of the Infinite will be different, at least in some small way, from that of every other finite being.

A brief experiment can assist in explaining this concept. Stand with another person in a reasonably open space, such a room, or garden. Face away from the centre of the space and each individually throw a small object, such as a set of keys, over your shoulder. Note were each object lands and note then try to describe the area in which they landed. In most cases, the descriptions will be radically different. One may have landed on a black tile, while another landed on a white one. One might be two meters from the wall, while another might be right next to it.

Given that we can have such differences in descriptions of where keys can land even in such a small and finite area as a room, why on earth would we expect that two people, who are throwing their minds into the Infinite of the Divine would describe the same experience, or learn the same lessons?

From this, it can be seen that it is effectively impossible to ever fully communicate any genuinely spiritual experience, or understanding to another. Irrespective of how much I attempt to communicate my spiritual journeys to another, they simply will not understand them as I do. Any attempt by me, or another to create a group of people who believe as I do will flounder on the rocks of misunderstanding as my “disciples”, inevitably fail to appreciate the complexity and subtlety of my experience and balk at the contradictions inherent within my message. They will inevitably become Heretics.

No two people will, or can ever have the same understanding of the Divine Mind. Anyone, who tells you that you must believe X, Y, or Z, because this is a spiritual, or religious truth has simply failed to appreciate the first thing about the nature of spiritual experience and the Infiniverse itself.

Modern Religion and the Abdication of Spirituality.

So, why do so many religions do offer dogmatic and prescriptive, legalistic interpretations of the Divine? Why is the world full of religions that expect believers (what an evil term!) to all agree to the same precepts and to follow the same behaviours?

Sadly, the truth is that these religions have been hijacked by people with no understanding of the spiritual experience. Most priests, imams and other “holy men” (interesting how so few are women, isn’t it?) are devoid of any real understanding of the spiritual. They have never experienced the Transcendent reality of the Divine Mind and it would never occur to them that such a state could offer them anything that their various traditions don’t already teach.

To make matters worse, those who hold positions of authority within these organizations, often do so, not because of their connections with the Divine, but rather because of their adherence to orthodoxy and their ability to successfully navigate the bureaucratic landscape of their religion’s hierarchy.

Having failed to understand the spiritual experience, these people attempt to identify the core “beliefs” that they think are relevant to whichever prophet they have followed and then proceed to present these as a series of “facts” that are to be believed by all followers. These “facts” are taught by the priesthood, in the same way as any other facts about the world, such as geography, history, or science. And people engage with them in the same way, taking on a raft of “facts”, about god that they then use as a basis for their religious belief. Failure to believe these “facts” is considered to be inimical to the desires of god and as such, the search for and persecution of heresy becomes a major element in the religious practice.

The end result is that people believe what they are told about “god”, in much the same way as they believe what they are told about everything else. They follow their faith in a manner more akin to following a football team than with any real desire to engage in a spiritual journey. Often this is simply because they are unaware that there might be any other path. Although they might seek to engage with a more personal form of religious practice, these attempts will most often be thwarted, opposed and subverted by the hierarchy.

But often this failure to engage with a genuinely spiritual journey is reinforced by the religious powers, who in seeking to cement their own authority disparage any and all other traditions. Mysticism is by definition a refutation of the power of the priesthood, as the individual seeks to connect directly with the Divine. As such, even when the mystical tradition occurs within a particular religious context, it inevitably distorts the original religion and threatens the positions of those who would seek to use the religion to advance their own status, or causes. Accordingly, mystics have historically been treated quite poorly by organised religious groupings, with many orthodox believers being told that they are representatives of evil, or the personification of Satan.

The end result is that the religions of the world use a variety of evil techniques, including fear, violence, guilt, social conditioning and ostracism to ensure that their followers don’t stray. Without a genuine understanding of the nature of the Divine Mind, they attempt to cage it within doctrines and dogma that deny the very essence of its Infinite nature. To believe that an Infinite, Omniscient and Omnipotent deity put forward by the monotheistic traditions would have only a single option for living the good life is absurd in the extreme and demonstrates more the lack of imagination of his supposed priesthood than it does any limitation of the Divine Mind.