I have had the good fortune to speak to many people in the media about my situation and this has resulted in some appearances and interviews.

Of particular note, I would mention Nick Wallis from Enpsychedelia on Radio 3CR and his show that broadcasts from 2 – 3pm every Sunday afternoon (Melbourne, Australia time). I have had the good fortune to be a regular on his show, even going back to the good old days, when it was just a podcast. The Enpsychedelia Blog can be found here and they are active on Facebook as well. 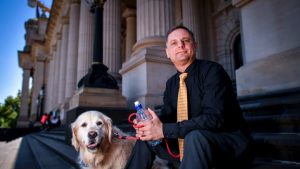 Greg Kasarik and Saasha, his Amazing Golden Retriever, on the Steps of the Victorian Parliament House.

Image by Eddie Jim,  courtesy of The Age Newspaper

Click on the link for the full article, or interview

“Back in January, Greg Kasarik was pleading guilty in the Melbourne Magistrate’s Court for LSD possession when he admitted to the judge that he had more tabs his pocket. Immediately, Greg was escorted off the premises, arrested, and charged again. Then earlier this week, he was back in court.

This might sound like an unusual turn of events for a guy who’s spent 10 years in the army. Perhaps not though if you consider he left the armed forces to do his honours in psychology. And that’s how, in his late 30s, Greg ended up at a party with people doing shrooms. He’d never taken psychedelics in his life. But he decided to join in, the first step on spiritual odyssey from which he’s never looked back.

These days, Greg Kasarik has become a public advocates for the legalisation of all “transcendental compounds.” His advocacy has included taking LSD on Parliament steps and once going on a 28-day hunger strike. Now he’s bogged down in a fight with the Victorian Government—arguing the prohibition of LSD is inconsistent with the Victorian Charter of Human Rights and Responsibilities 2006 because the ban impinges upon his rights of freedom and belief.”

12 Jan 2017
“Greg Kasarik is a drug user who is probably too honest for his own good.
This week, when he had a charge dismissed by a magistrate after pleading guilty, he volunteered to Melbourne Magistrates Court that he was again breaking the law by possessing a drug of dependence.

He was escorted outside the court by three police officers, arrested and charged again, and is due to return in three months.

Far from trying to avoid the law, Mr Kasarik’s preparedness for repeat offending is based on wanting the drug LSD regulated by the state government, so he and others can buy and use it safely.”

19 Jan 2017
“Greg Kasarik appeared in Melbourne’s Magistrates Court on January 10 this year, on a charge of being in possession of a drug of dependency. Kasarik was arrested on April 19 last year, when he was found in possession of LSD, while he was tripping on the steps of the Victorian parliament house.

At last week’s trial, Kasarik argued that the state’s laws regarding LSD were inconsistent with the Victorian Charter of Human Rights and Responsibilities 2006, as these laws were impinging upon his rights of freedom of religion and belief.

Kasarik asked that the matter be referred to the Victorian Supreme Court. Magistrate Paul Smith refused the request. At that point, Kasarik pleaded guilty to the charge of possession. He then produced a vial of LSD in the courtroom and asked to be rearrested.

The former army corporal and careers counsellor plans to continue his push to have his case referred to the highest court in the state, when he appears in court again in April.”

16 Mar 2013
“A renewed interest in hallucinogens—particularly the Amazonian tea ayahuasca—is giving the substances a new image that emphasises spiritual learning over hedonism and excess. Kerry Stewart talks with the researchers and spiritual seekers working to rid the drugs of their stigma and turn psychedelics into sacrament.”