Entheogens are chemical substances which allow people to experience the “Divine Within”.

Generally classified as “Hallucinogens”, they have been used by many religious traditions for thousands of years and are an integral part of the religious practice of tens of thousands of people today. 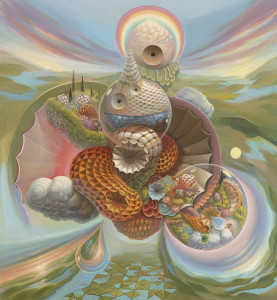 While the word “Entheogen” is over three decades old, it is hardly known outside the “Entheogenic community” of people who use these substances. In addition, there is considerable debate regarding what an “Entheogen” actually is, with some people arguing that it includes any substance that has had a sacred use at any stage, while others believe that it should refer to substances that create the subjective experience of communion with the Divine.

Given the original intent of the people who coined the word and its roots in Ancient Greek, which stands for “God inside us” (en εν- “in, within,” theo θεος- “god, divine,” -gen γενος “creates, generates”), I hold to the second camp.

For a while I advocated a more limited meaning of the word, one that would suit my own personal view of these compounds. However, while some in the community had sympathy for my position, few felt that it was true to the original intent of the word.

Accordingly, I have chosen to coin yet another term, “Transcendent Compound”, (so you won’t find it in Wikipedia until a few more people start using it!), in order to refer to the compounds that are both spiritually valuable and undeniably safe.

A Transcendent Compound is as substance that:

1. Reliably allows a person to touch the Divine Mind.

4. Is psychologically safe, within an appropriate dose, set and setting.

While there are quite a number of substances that might to fall into this category, the main ones used in Australia are as follows:

Mescaline: The psychoactive compound found in certain types of cactus. It is used legally by the Native American Church, who consume it through the peyote cactus.

Psilocybin: The Psychoactive compound found in sacred, or “magic” mushrooms that have been used traditionally by the Mexicans. These mushrooms are also endemic to Victoria and grow throughout Melbourne, although I am not aware of any record of their traditional use by the local aboriginal populations.

LSD: A synthetic compound with effects very similar to both Mescaline and Psilocybin. Despite its dangerous reputation, it is perhaps the safest mind altering compound known to humanity, with an estimated lethal dose well in excess of 2000 times the active dose (compared to ten for alcohol) and only a single overdose death ever recorded in peer-reviewed medical literature.

DMT: Known as the “Spirit Molecule”, this is found in the South American Ayahuasca Brew. It is also found within numerous grasses and wattles that are native to Australia. Brews using these are sometimes referred to as “wattlehuasca”.

Salvinorin A: Found in Salvia Divinorum, which is also called “Diviner’s Sage” it is used by the Mazatec Shamans of South America.

This listing is borne out by the results obtained in unpublished research by Dr David Caldicott (2007, unpublished). In this survey of over 100 members of the Australian Entheogenic community only two Mind Altering Substances were reliably identified as being used for “Enlightenment”. These were:

Given its importance to the Entheogenic community, DMT, which was accidentally left off the survey, would expect a similarly high response.

Similarly, Mescaline with very similar effects to both LSD and Psilocybin is also be considered a Transcendent Compound and is widely used within the Entheogenic community.

Ketamine, which was reportedly used by 39% of the sample is an example of an Entheogen which doesn’t rate as a Transcendent Compound. The reasons for this are twofold. Firstly, it is highly addictive and secondly it can, with prolonged use (often inevitable with highly addictive substances), cause potentially irreversible damage to the bladder.

Only three percent of the respondents reported using alcohol for “Enlightenment”. This should not surprise anyone, especially those in the community services sector, who have had to deal with the fallout from the anti-social behaviour, violence and aggression that it often causes. Alcohol isn’t the sort of substance that assists people to achieve a connection with the Divine. Quite the reverse, in fact.

Intriguingly, it has recently been revealed that Bill Wilson, one of the founders of Alcoholics Anonymous wished to use LSD as part of the AA program, but that this idea was rejected by more conservative members, who felt that using one drug to treat another was somehow bad. Some research in the 1950s and 60s hinted that LSD could be a viable treatment for alcoholism, but this research was never validated and efforts to do so came to a close with the halt to all LSD research when it was made illegal.

As with all psychoactive compounds the use of Transcendent Compounds may entail some risk. For example, Cohen (1960, cited Nichols, 2004) estimated that the incidence of LSD related psychosis was perhaps 8 per 10,000 people. However, given that life entails risk (a plane could hit you as you are reading this…) this shouldn’t worry people unduly, especially as the risks of toxicity and overdose are absent.

Indeed, when compared to other activities, the use of these compounds compares quite favourably. For example, the New South Wales Injury Management Centre’s “Sports Injury Report” dated September 2006, identifies that motor sports sustained 11.3 serious injuries, or deaths and 94 hospitalisations per 10,000 participants.

So while they can’t be regarded as perfectly safe (nothing can), decades of research clearly show that they fall within the acceptable limits of safety when compared with other activities that are legal within our communities.

Each of the Transcendent Compounds can be considered psychologically safe to use, assuming an appropriate “dose, set and setting. If any of these are an issue, a negative experience may emerge at some point of the “trip”.

“Dose” refers to the amount taken and as with any activity, sensible people will approach dose cautiously, starting with threshold amounts, before scaling up to more “shamanic” doses.

This is important, because different people respond differently to the same dose. For example, I know many people who never take more than half a tab of LSD, while others wouldn’t experience anything meaningful at that dose.

As one becomes more experienced, the dosage can be increased. My first experience with Transcendent Compounds was four mushrooms, which was a great introduction. Had I taken significantly more I almost certainly would have had a horrible time and never gone near them again.

In many ways, dose can be thought of as riding a motorcycle. Only a fool would jump straight onto a 1100cc racing bike and expect to not get hurt.  Smart learners will stick with a low powered bike, that will take them where they need to go, but not be uncontrollable.

“Set” refers to a person’s mindset at the time that they are taking the compound. Just because something is wrong, in your life, it doesn’t therefore follow that a negative experience will be felt. For example, I know of a person who took a low dose of LSD at his father’s funeral, and he described it as one of the most meaningful, beautiful and profound experiences of his life. Similarly, when in 2012, I was diagnosed with cancer, I took a large dose of magic mushrooms, which allowed me to put the disease and my life back in perspective.

“Setting” refers to the physical environment that you are in and people around you. Especially at the outset, it is important to only go on these journeys surrounded by people who you trust and in a peaceful environment without undue distractions.

Parties are perhaps the worst place for inexperienced people to start taking any hallucinogen.

Perhaps the most important thing to remember is to take adequate precautions, such as learning about what to expect prior to the experience and having an experienced, trusted sitter present. If you take the time to educate yourself and know what is to expect and there is almost no chance of something going wrong.

Click here for my Beginners Guide to Safe Tripping.

THC – The Spiritual Compound (AKA Cannabis)

Because of its addictive potential, marijuana cannot be included as a Transcendent Compound. However, despite this, it is still the most widely used Entheogen in the world and rightly deserves its place in the sun.

Many, including myself, have found this compound to be very useful for spiritual exploration. Even scientists, such as Susan Blackmore have reported that they use it for its capacity to help the creative processes. Cannabis has safely been used as an Entheogen for thousands of years and despite being illegal in most countries is still consumed by millions of people annually, although few realise its true potential as a Spiritual Compound.

A personal example of this was my realisation that “god can never know if god is God”. I initially discovered this truth while engaged in deep thought under the influence of cannabis. However, it was not until six months later, when I returned to the concept, again under the influence of cannabis that I realised how important and devastating this realisation is to the fundamental assumptions of traditional monotheistic religious belief.

While not Entheogenic in the same manner as LSD, or DMT, cannabis has considerable potential for the mystic who wishes to explore the deeper realms of reality and consciousness.

Unlike alcohol, marijuana is non toxic and nobody has ever overdosed on it. This is unsurprising given that a person would need to consume over 550 kg of the plant within 15 minutes before you even had a chance at overdose. Try to smoke that much and you’d asphyxiate first!

Similarly, while it can produce short-term psychosis (that is after all one of the reasons that people take it), there have decades of research have been unable to draw any clear links between it and long-term psychosis. Even the much vaunted link between the use of this plant and schizophrenia doesn’t hold up once one looks at all the evidence available and remembers that correlation does not equal causation. Over the years I have known a number of people with schizophrenia who reported using cannabis because it moderated their condition and made life easier to handle. Several have told me that if it weren’t for their use of cannabis, they probably would have committed suicide.

Unfortunately, THC has some potential for addiction. Research shows that this potential is less than that found in compounds such as alcohol, or heroin and is comparatively easy to manage. Prolonged and intensive use can still mess you around quite a bit, but there appear to be no significant long-term adverse affects from its use.

NOTE – Cannabis is not one of the compounds that I have been lobbying the Government to provide regulated access to. While it is useful, I only use it rarely, and it will be made legal quick smart, when the half a million (OMFG!) Victorians who use it each year get of their bums and tell the Government that they want it made legal, “or else”.

4 thoughts on “Entheogens and Transcendent Compounds.”