Atheism and the Curse of the Colour Blind 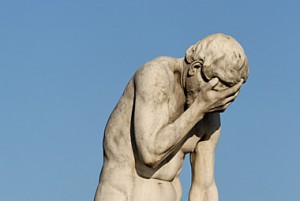 Given the theory of belief outlined in the previous chapter, it becomes clear that many atheists are people who see no objective evidence for God and perhaps more importantly, feel no subjective connection to the Divine. Unlike the theist, they have no inner sense of the Divine. When compared to the theist, who senses the “colours” of God, they are effectively, colour blind. However, they are no more to be blamed, or stigmatised for this, then are the colour blind to be blamed, or stigmatised for their condition. For whatever reason, they lack an inner sense of God and there is no operation, or procedure that is going to get it back for them and no obvious reason why anyone but a religious bigot lost in arrogant certitude would want to.

After all, they may be right!

Indeed, it is those with colour vision, who foolishly try to insist that there is only one colour, rather than a glorious and infinite palette of rainbows who are the ones who should stand condemned as evil. Religions have historically behaved like men who could only see shades of blue, and then who fractured yet further to insist that only one shade of blue was the one that mattered and was important out of all of the variety of the rainbow.

So, instead of rejoicing in the Infinite Mind of the Divine, man (and it usually is man) has instead sought to control, subjugate and victimise people who see the Divine through slightly different eyes. Rather than celebrating the colours inherent in the rainbow and accepting that all have some inherent validity, whole nations and civilisations have become locked into paths of assured self destruction through the misguided hubris of believing that their finite perceptions of the Infinite are somehow superior to that of others.

Given the often sordid history of the supposedly religious, it is unfortunate that this tendency, to proclaim the truth as being only what one can personally see, has recently begun to infect many non-believers. These fundamentalist atheists are now shouting to the rooftops with their declarations that there are no colours and that those who believe that there are must be intellectually dishonest, fraudulent and perhaps even ultimately evil, or at the very least complicit in the evil carried out in the name of religion. Needless to say, in their invective and arrogant disregard for the points of view held by the other, they fail to see the tragic irony of their position and the fact that they have done little more than introduce a new dogma over which to people can fight, like dogs in a pit. This is sad; afterall, they may be wrong.

This is why it is vital that providing that so long as the Ethical Principle is adhered to, all spiritual paths remain open for exploration and people not be condemned for believing differently. Just as all colours of a rainbow are equally valid, so to are all spiritual beliefs. The Ethical Principle ensures that we are not screwing things up for other people, and while this is the case, there is no reason to limit behaviour, or impose sanctions on those who think differently. Ultimately nobody should ever be persecuted for either belief, or non-belief, for the insane certitude of the fundamentalist is the path down which the ultimate destruction of humanity lies.

Sooner, or later we won’t be simply flying planes into the sides of buildings. Instead we will be unleashing something much more lethal and permanently damaging to the future of us all.