It is always intriguing how insecure so many militant believers actually are. They are so happy to abuse and condemn others, but can’t handle anybody taking them to task for their inaccuracies, or routine obnoxiousness. 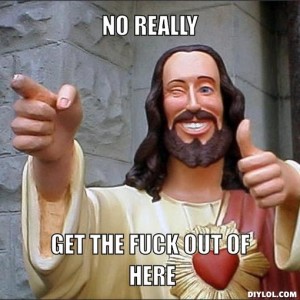 If this is your immediate response to even mild criticism, then maybe you need to take a hard look in the mirror of life.

A while ago, I was invited to a closed group of atheists on Facebook, run by one of these people. Despite not being an atheist (at least not by a definition that they would accept), I accepted the invite, because there is often some good discussion in these groups.

Turned out that I was wrong!

Today, the group’s Rather Obsessed Founder (ROF) posted a link hostile to Islam, which was commented on by someone who was obviously a Muslim (don’t know how he managed to get in!), to which ROF immediately posted an obnoxious reply to the effect that Mohammed was a pedophile and a terrorist.

Ironically, I had just posted my own reply to our Muslim friend, pointing out that while Mohammed was a pretty cool guy for his time, his “model society” was still significantly flawed, especially in its treatment of women.

So, I am hardly an apologist for Islam! I replied to ROF calling him out for being both needlessly rude and factually incorrect. Firstly, while Mohammed did consummate his relationship with his nine-year old wife, there is no evidence that he met the DSM-V definition for pedophilia, which requires “a primary or exclusive sexual attraction to prepubescent children, generally age 11 years or younger.”

Secondly, while Mohammed engaged in the sorts of raids and warfare that is typical of tribal societies, he demonstrated considerable reluctance to go to war and sought to spare captives where possible. For example, when he entered and captured Mecca he did so at the head of a band of unarmed followers. There was nothing to stop his enemies slaughtering him, but he took the chance and in doing so avoided considerable bloodshed.

ROF then sought to tell me that he “calls it like it is” and is “brutally honest”, before posting a rather unimaginative picture of Jesus telling me to “get the fuck out of here” (see above).

I responded by calling him out yet once again, and pointing out that every ignorant, anti-social jerk hides behind the “call it like it is” and “brutally honest” catchphrases. I also pointed out that I wasn’t going anywhere, and if he was that insecure that he couldn’t cope with people disagreeing with him, he should simply eject me from his closed-group, nightmare utopia.

Which he promptly did! To add insult to injury (his not mine) he then proceeded to block me entirely from his Facebook experience.

It just goes to show that what is important isn’t what people believe, but how they behave. Here you have a guy who is so convinced that he is right and that everyone else is wrong, that he sees no problem in hurling his anger, frustration and abuse at perfect strangers, while demonstrating that he is incapable of handling the gentlest of criticism.

In all honesty, I don’t see any difference between people like ROF and many of the fundamentalist theists that he opposes and attacks. In both cases, these people have not only already made up their minds, but tied their entire self-worth into an external identification, whether it be as an atheist, Christian, Muslim, or whatever.

Apply even the smallest of challenges to this worldview and the result is an overwhelming attack and/or rejection, as the person feels the very core of their being come under attack. God help us if these people ever achieve political power.

Once again, I find myself wishing to express the sentiment that I believe that all people of goodwill can and should work together in order to achieve a win-win solution to the problems that plague our world.

People are people, irrespective of were you find them, or what they believe. Good and bad exists in every person and in every culture (although I do believe that some cultures are better than others, because they do more to promote values of tolerance, understanding and compassion) and our job needs to be to reach out to people who are prepared to work with us towards a better world, irrespective of what they happen to believe about the nature of ultimate reality.

While I routinely criticise the belief structures of others, when it comes down to it, I know that nothing I write is likely to change your mind and don’t really care what you believe, unless those beliefs are antithetical to my wellbeing, or the wellbeing of others. If your beliefs tell you to persecute, condemn and kill people who are doing no harm to others, then I have to say that I don’t regard you as a person of good will.

If you think it is OK to be an obnoxious jerk, or violent towards those who disagree with you, it matters little to me if you are an atheist, agnostic, or theist, because if you believe this, then you are the problem, not the solution.

Today’s experience was with someone who honestly seems to believe that he is the solution. I’m guessing that despite his thin skin and possible self-esteem issues, his self-image is of being on the “right side” and probably even a “good person” for standing up for “Truth”. Despite this, all he is actually doing is making the world a more hostile, angry and antagonistic place for us all.

Time for us all to recognise that our beliefs don’t define whether we are agents of Light, or Dark. None of us holds reality in the palm of our hands and we need to learn to work together and play nice with the other children if we are ever going to bring peace to our world.